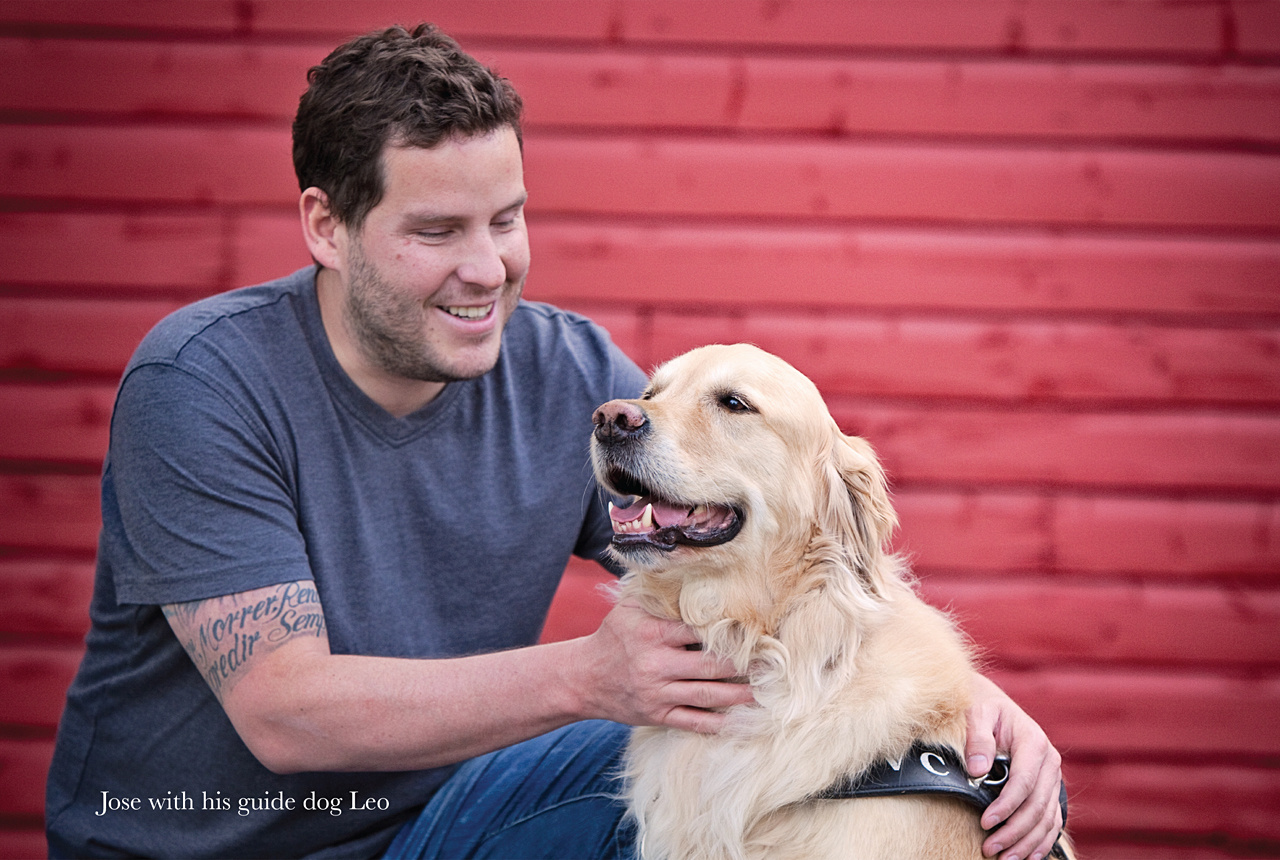 The story of Jose Neto is one that you might expect to see in a Hollywood film. It is a story of tragedy, hope, and triumph that has touched the hearts of many Calgarians.

On a September evening in 2008, while enjoying a leisurely stroll through Calgary’s Chinatown with his girlfriend Roberta, Jose’s life was unexpectedly changed forever. By a stroke of misfortune, he was struck by a stray bullet from a nearby altercation. He was left permanently blind.

At the time of the shooting Jose was a talented 24-year-old business student who had traveled to Canada from Brazil to further his education and sharpen his English skills. He had his whole life ahead of him with endless dreams and possibilities.

Following the shooting, rather than being overcome with anger and resentment for what he had lost, Jose shocked the public when he showed optimism and gratitude for the second chance he had been given. He has spoken publicly over the years about his love towards the Calgarians who had not only come to his aid after the accident, but who still to this day offer kindness and compassion for what he went through.

Originally Jose and Roberta had intended to spend only a year in Canada. It was near the end of their visit when the tragedy occurred, turning all of their plans upside down. Despite this, the couple’s love for Canada and the support of the Calgarians around them cemented their decision to stay, and in December 2014 they became Canadian citizens.

It was roughly two years after the accident that the idea of applying for a guide dog was brought to Jose.  By then he had enough time to get used to his new reality and was motivated to regain some of his independence. “Not being attached to a person would be awesome. Just being myself, going to the mall, and walking on my own,” Jose said.

Six months after the initial application for the guide dog, Jose was accepted for training at the Lions Foundation of Canada Dog Guides in Oakville, Ontario, where he spent four weeks learning to live and work as part of a guide dog team.

Upon his arrival at the training facility in Oakville, Jose realized that the program was as much about training him as it was about training the dogs. For the first week of the program the new handlers worked without dogs, allowing the trainers an opportunity to determine the best match for each team.

Although Jose had grown up around dogs, the process of handling a working dog was an entirely new concept to him. It didn’t take him long to realize that there was only one way through the program: to surrender completely. Jose would have to trust in a new relationship that could not be built with a moment’s notice. It would only be through rigorous trial and error; an emotional thrill ride that would ultimately be a unique bonding experience between Jose and a dog that he was just getting to know.

It was within the first few days of the program that Jose was introduced to Leo, a one-and-a-half year old Golden Retriever. “When you go to the school of guide dogs, you don’t get to know what dog you’re taking for three or four days. They just tease you around,” Jose reminisced with a smile.

Over the first few days the handlers would spend time in a courtyard with all of the dogs, not knowing which would be their future partner. The first couple of times that Jose and his class visited the courtyard Leo glued himself to Jose’s side. “All the pictures we took there, not knowing, Leo is right by my side.”

Over the course of the four-week training program Jose began to learn the realities of working with a guide dog. Like most of us who have never worked directly with a guide dog before, he had no idea what they were capable of.

The training program opted for a hands-on graduation test, leaving the newly trained teams of two alone in downtown Oakville and having them navigate back to the training facility.

True to form, Jose’s tenacity proved successful. “We did it well,” he said with an uneasy laugh, “but it was so nerve-wracking!” Graduation did not mark the end of the learning process for Jose and Leo, and it took over a year for the two to solidify their bond with one another.

“When you come home it’s a different story,” he said. “It’s another process of learning to be with just you and the dog.” The lack of bonding within a new guide dog team can sometimes cause the dog to be indifferent to the commands of their new, unproven master. Jose recalled one of these more uncomfortable instances of Leo’s defiance when, instead of crossing the street, he walked Jose diagonally through the middle of a four-way stop. But throughout the training and bonding process, Jose relied a lot on his own determination and trust to ensure that he didn’t let these setbacks deter him from working with Leo.

“You have to trust,” said Jose. “You have to keep going. If something happened, it happened, but you really have to keep going and trust. And that’s the big thing about being blind. It’s really trusting yourself and your senses, and trusting the people around you. Trusting that people are giving you the right change, because you have no choice. You either do that, or you don’t live.” Fortunately, Leo’s risky behaviour was short-lived and the pair eventually found their stride together. “I noticed that one day Leo just clicked, and he just did everything he was supposed to do,” said Jose.

After having achieved that dependable bond, Leo’s capabilities have never ceased to impress Jose. Having Leo help with everyday things such as finding doors, stairs, elevators, and even the bus stop, is of immeasurable benefit to Jose. “If you go to, say, the Superstore, that’s huge. If you say ‘find the door,’ he’ll cross that parking lot right to the door,” Jose said, with complete admiration for Leo’s capabilities.

Leo has also been able to adapt to Jose’s specific needs. Time and time again, Jose would hit his shoulder on the side mirrors of large trucks while walking between vehicles. He had assumed that Leo couldn’t protect him because he was too low to see the mirrors. This continued until one day Jose suffered an especially hard knock to his shoulder and he made a point of showing Leo what had happened. Since that day Leo has never let him walk into another mirror again. This was just another sign to Jose of Leo’s incredible capabilities to immediately adjust in order to keep them safe.

In August 2015 Jose and his now wife, Roberta, welcomed their first child: a daughter named Lis. The independence that Leo allows Jose lends itself well in supporting him to be a parent. “We will see it in the future,” Jose predicts of Leo’s impact on his daughter’s life. “Her day home will be close by and I’ll need to go and grab her and he will take me there. So then he will start helping me as a parent more.”

But in the meantime, Leo’s presence is a great help to Roberta, allowing her and Jose some freedom so she can focus on Lis when they are out and about in the city.

While other hurdles have been overcome, the most persistent obstacle for Jose and Leo remains the general public’s lack of education regarding guide dogs. Jose asserts that one of the most important rules of etiquette when meeting a guide dog is that they are working dogs and should not be pet. The bonding process between dog and handler can take some time and some dogs can be sensitive to interferences. Petting a working dog can cause a distraction that can put the handler in harm’s way. Other distractions include asking the dog’s name or making direct eye contact with them.

Another misconception is that guide dogs are not treated like members of the family. However, in their off-duty hours, they are given just as much love as the standard spoiled pooch. For Leo, cuddles are a regular occurrence. Jose was quick to note that in training, the new handlers were also counseled to give their dogs more than enough affection so that they would never need to seek it from anyone else.

In September of 2015, Jose and Leo received the ultimate of Calgarian honours when they, along with four other guide dog teams, were commended in a special White Hat ceremony during the second annual Working Dogs Day in Calgary. The White Hat was given to Jose both as recognition of his unbreakable spirit in the face of adversity, as well as for his continued contribution to the city of Calgary.

Jose and Leo’s story is a reminder to us all that with a little trust, some compassion, and a lot of love, new beginnings are always possible.

Jose Neto is now a registered massage therapist and owns his own clinic in South East Calgary (Cure Massage). His motto is; “In essence my hands have taken on what my eyes have lost.” Visit www.curemassagetherapy.com

Emily McInnis-Wharton is about to begin her second year in the Journalism Program at SAIT. She is passionate about writing and photography, and of course dogs!

Keeping Your Dog in Good Hands

Safe Holiday Diffusing For Your Dog

Giving Back to Support Calgary Dogs